It is a known fact that travelling is one of the best medicines against a distressed mind or a fatigued body. Not only that, but as famous writer Mark Twain used to say, it is also “fatal to prejudice, bigotry, and narrow-mindedness […] Broad, wholesome, charitable views of men and things cannot be acquired by vegetating in one little corner of the earth all one’s lifetime.” It is on these premises that one should try (myself included) and see as much of the world as one can during their time on this earth and take each opportunity that presents itself for such endeavors, as it is most difficult to take advantage of them in the more and more hectic existence of the current society.

Recently I have been presented with such a rare and occurrence and I knew I had to take it, even if that meant giving up on other undertakings that required my attention at the same time.

In the context of my collaboration with the Suwon Center for International Cooperation as a foreign correspondent, I have been invited to visit the city during the Hwaseong Cultural Festival, which took place in Suwon during October 8 – 11, 2015. Having previously attended the festival in 2013 I was thrilled at the idea of experiencing once again the hype and dynamic atmosphere created by the event. Thus, even though I am not so much of an energetic and active person, I wholeheartedly embarked upon the trip, which had not one moment of dullness.

Having arrived in the morning of October 7th, I was met at the airport by a volunteer with SWCIC and had a refreshing beverage while chatting away my jet lag and getting ready for the next few days, which I found absolutely fantastic, from every perspective: the food was divine, the entertainment exquisite, the lodging most confortable, and the schedule quite permissive while not bland.

First and foremost, food. As it is generally known, Korean cuisine has a palette so varied that it is hard to be able to say that you’ve actually tried enough of them to form a general opinion and decide if it matches your buds or not. However, I’ve been offered quite the diverse culinary experiences, from flavorful traditional dishes such as samgyetang, jjimdak, kimchi jjigae to the famous Suwon kalbi or the notorious chicken and beer, all of which tasted incredible. I found that even if Korean food is essentially different from most food I’ve tried up until now, the choices are so varied that one is bound to find something similar to the food in their country and, inevitably, something that matches their tastes so well that they could have with almost every meal. In any case, one must not despair, as there is also western food available and many other options at the international cuisine booths set up for the Festival, therefore anyone can have a pleasant culinary experience. 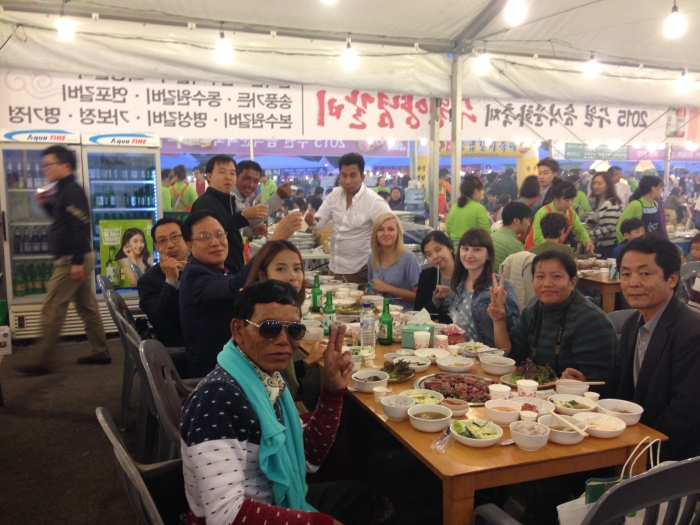 Secondly, the festival itself was surprisingly entertaining. As I have attended it previously, I knew the general outline and progression of the events. However, they were even more diversified than I had remembered, and even had new additions, such as a beautiful and modern fashion show; alongside the traditional grand opening ceremony and the performances put together by the teams representing some of Suwon City’s sister cities from all over the world. It was really a sight for everyone, no matter their age or interests. It had a food fair where chefs from overseas came to promote the cuisine of their origins, exhibitions of traditional and manual crafts, plays adapted from traditional children’s fairytales for the younger audience, musical performances of the sister cities delegations, a fashion show for the modern-oriented audience, and of course, concerts, among many others. Also, one cannot say one participated in the festival without seeing the King Jeongjo the Great’s Royal Procession to the Royal Tombs, which stops even traffic for its duration. 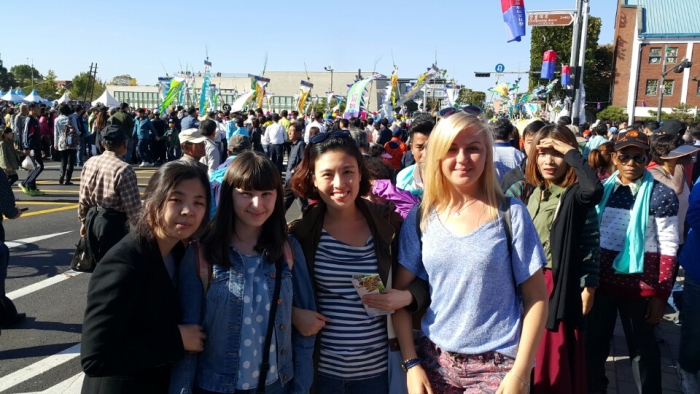 As I was invited officially out of the generosity of the Center, I was also provided with transportation, meals, and lodging all of which, I must say, was absolutely exquisite, something that made this trip feel like the most luxurious vacation. To add to the feeling, I was also provided with a touristic program for the cultural delegation of which I was part alongside another correspondent and officials arrived all the way from Suwon Village in Cambodia.

Even though it was only three days’ worth of visiting, it offered a large variety of locations and activities that provided great insight to Korean culture and that helped a great deal towards further understanding of Korean mentality.

I visited places such as the Hwaseong Fortress, an enchanting establishment that no matter how many times one visits it always surprises with its serenity and a feeling of having learnt something new. Another memorable location was an old church which housed an art gallery and from the top of which one could see most of the city. What was breathtaking was the way the Fortress and old buildings coexisted harmoniously with the intimidating and modern sight of tall skyscrapers. In these instances, one can indeed observe the effort and dedication of Korean people towards preserving their identity and maintaining their sense of self in this globalized and generalization-prone society. 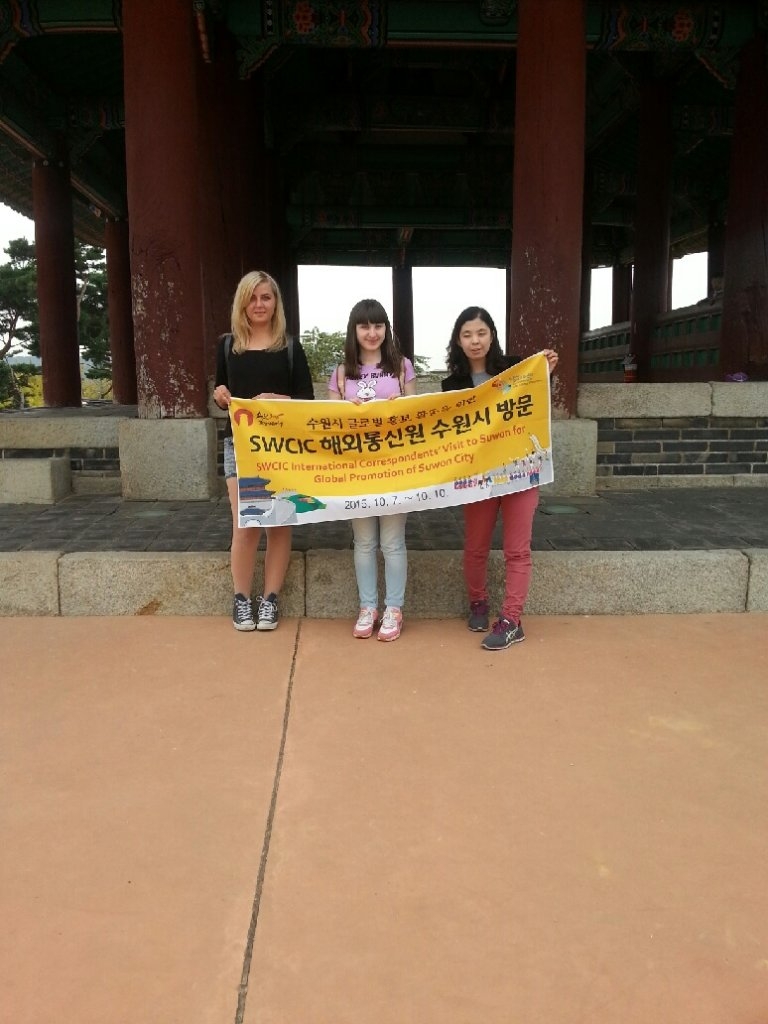 I had also the opportunity to further my knowledge in the art of Hanji, a traditional art that consists in crafting objects out of special Korean paper. Though a laborious and dexterity-demanding endeavor, it is a skill that is still dear to the hearts of Koreans, which is why there are continuous efforts made in preserving and promoting it. It was not my first encounter with this beautiful art and the beautiful instructor that made me feel I did not have two left, clumsy hands, as I usually do. In May, during the Cluj Days Festival, a part of the cultural delegation was in charge of a booth that promoted such crafts and encouraged Cluj citizens to try it themselves. I did not have the chance to try it at that time, so I was most excited to be able to experience it now. Much to my surprise and delight, the instructor was one of the kind and delightful ladies that were also in the cultural delegation that visited us in May, so it was like a continuation of that beautiful experience. As I was materializing this memory through a unique souvenir made with my own hands my knowledge on this art was broadened by the instructor’s generously offered insight. This was followed by a demonstration of how a traditional tea ceremony should progress, an event of incredible serenity and calming effect in contrast to the rigorous rules that must be followed. 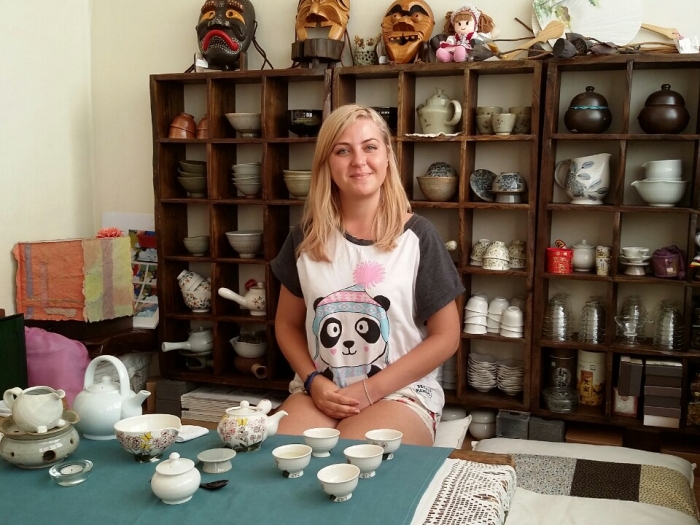 Offering an opposite sensation was the dynamic and engaging stage at the festival, where the sister cities were performing as well as local bands and acts. Even after a day full of activities that completely drained my energy (given that I do not have a whole lot to begin with) I was mesmerized and taken in by the collective energy of the audience, joining in their determination to have a good time and enjoy to the full each and every act, from the tiniest baby to the most vigorous senior citizen. 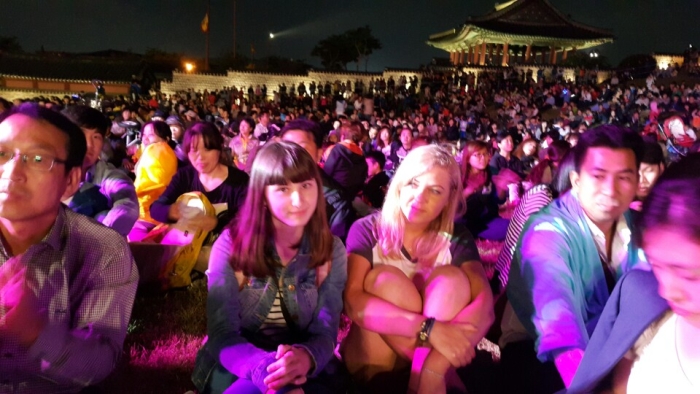 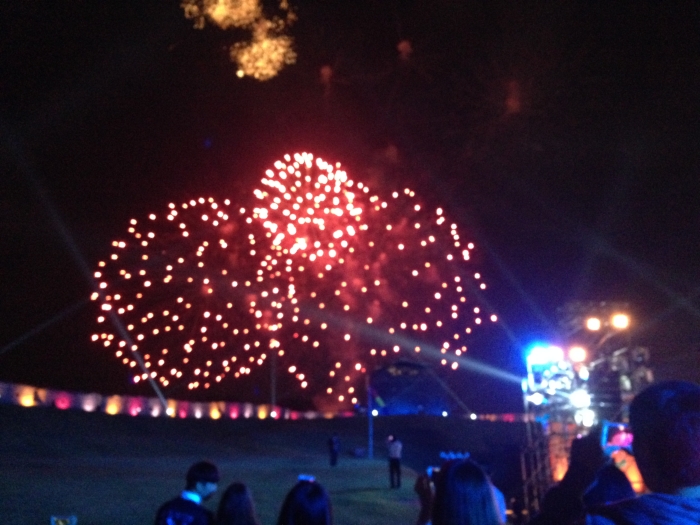 Completing the circle of a truly diversified range of activities was a visit to Everland, where I was once again presented with the Korean spirit of enjoying an experience to its full potential. As it was a national holiday, namely Hangeul Day, the place was brimming with families and couples who came to have a good time together. Even if one is not much a carrousel enthusiast, Everland is definitely a place worth visiting, if only for the gorgeous landscape, positive energy, the multitude of culinary and entertainment options, or simply the life-inspiring atmosphere that one feels deeply just by strolling around the park. Of course, for those who do enjoy the thrill of an adrenaline-packed experience, the park is sure to provide the most satisfying of memories.

I cannot possibly conclude without emphasizing one of the most memorable aspects of this trip: the people. During the stay I witnessed and was met with some of the most polite, thoughtful, and generous individuals. The attention and kindness I received not only from those who assisted me during the trip but from complete strangers were out of this world. Also, as I am someone who likes to observe, I noticed that this was not just a privilege of which I was the sole receiver, but a general state, politeness and propriety being the norm, in contrast with other western cultures, where individual comfort and wellbeing takes priority to a civilized and thoughtful conduct.

Regardless of the short duration of the trip, it was one of the most eventful, insightful, and satisfying experiences of my year, therefore, I strongly advise anyone who is considering taking a trip there to do so. It has so much to offer that even if one is to visit it multiple times (as was my case) one never ceases to be amazed at how much new information and spiritually enriching experiences are waiting to be discovered.[:]

This website uses cookies to improve your experience while you navigate through the website. Out of these, the cookies that are categorized as necessary are stored on your browser as they are essential for the working of basic functionalities of the website. We also use third-party cookies that help us analyze and understand how you use this website. These cookies will be stored in your browser only with your consent. You also have the option to opt-out of these cookies. But opting out of some of these cookies may affect your browsing experience.
Necessary Always Enabled
Necessary cookies are absolutely essential for the website to function properly. This category only includes cookies that ensures basic functionalities and security features of the website. These cookies do not store any personal information.
SAVE & ACCEPT